Why are the decisions we are taking incorrect?

The United States’ role in foreign matters has increased so much since the framing of the constitution that the method through which decisions are taken is ineffective. One of the biggest drawbacks of our present system is the principal-agent problem, which occurs when the elected representatives of a nation are not acting out in the best interests of the people. Most decision making in the United States is divided across the government to prevent this problem. However, when it comes to foreign policy decisions, the executive branch of the government has considerable influence. One of the biggest examples of this is the widespread skepticism of military intervention among the American people. (Real Clear Politics 2017) While opinions vary on the issue based on polling methods, it can be observed that there has been widespread disagreement between the population and the executive branch since the early 2000s. From the graph below, it can be inferred that most Americans do not support most forms of intervention unless it is to prevent a global crisis. 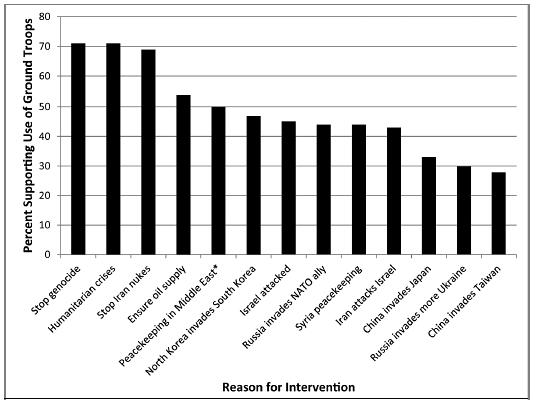 Even after this many political leaders continue to support American interventionism and other policies like regime-change due to a perceived “responsibility” to intervene. This approach is flawed for several reasons.

First, the world is filled with bad actors. A Reuters poll in 2018 ranked India as the worst country for women’s rights. (Goldsmith 2018) Bahrain, Myanmar, Egypt, Ethiopia, Eritrea, and China are some of the leading nations for cases of journalist arrests. (Santhanam 2016) Saudi Arabia has been acknowledged by many as a nation with some of the most oppressive laws towards women, foreign nations, journalists, and migrant workers. (Al Jazeera 2018) Somalia and Nigeria consist of some of the leading terrorist organizations: Al-Shabaab and Boko Haram, respectively. (Dudley 2018) None of these nations, however, have been a target for American interventionism like Iraq, Syria, Yemen, and Afghanistan have been. These examples barely scratch the surface of human rights violations by other nations. If America truly applied its moral responsibility consistently, nearly every part of the world would require military intervention.

Second, America is not one of the most morally progressive nations. America has committed genocide against their indigenous populations. (Blakemore 2019) Do Americans believe that another country’s intervention would have helped better this case? Also, is military intervention better than economic intervention when trying to influence another nation? Iraq, Syria, and Yemen gained colonial independence relatively-late in the 1900s, and they haven’t been given anywhere as much time as the U.S. to become morally good nations. Additionally, the U.S has taken very few attempts at diplomacy over intervention in these cases. Some lesser/more recently known instances about bad morality are the U.S. funding the Saudi-Arabia led coalition in Yemen (Bazzi 2019) In the same Reuters poll that ranked India as the worst nation for women’s rights, the United States is ranked tenth. (Goldsmith 2018)

Why is the system through which we make foreign policy decisions not working?

Now that the general arguments for military intervention have been understood, let’s try to understand why the process and accountability of the United States’ government is broken. The founding fathers put certain limitations of power on the three branches of government while making foreign policy. However, it can be clearly noticed that this balance of powers has not been efficient as nearly every major foreign policy decision has been either carried out or approved by the executive branch of the government. Also, it can be easily inferred that the U.S. has too much power in international organizations such as the U.N. (Borger et al. 2015)

1. Reconstructing executive action and truly giving the legislative the power of the purse The President is the dominant actor in American foreign policy. The President not only has the power to persuade while making foreign policy decisions, but also has significant power in defining and implementing policy options. Additionally the executive branch has gained even more power since the start of the 21st century. The Authorization for Use of Military Force (AUMF) policy passed after 9/11 became a medium through which executive action could be taken with less accountability from other branches of the government. (United States Congress 2001) The power of the executive has become so deeply rooted in foreign policy decision making that the President’s power to persuade has become the power to threaten. Executive action and the ability to send troops allows the President to take initial initiative without Congress approval. Hence, Congress lost significant influence over foreign policy because they would rather see a decision that they disagree with passed than see a military failure where American lives are at stake. Presidents should not be allowed to send troops of the armed forces to another country without a definite majority of Congress. A two-thirds majority would seem most reasonable for decisions that focus on regime change as that would overcome ruling party biases in most cases and make the President’s power to persuade a stronger requirement to make decisions. The only exceptions to this rule should be crisis situations. Also, any military situation that is later found to clearly not have been a crisis situation should be grounds for impeachment under abuse of power/war crimes.

2. Limiting bureaucracy influence in executive decision making: Foreign policy decisions are very complex and consist of many details that Presidents can not take care of individually. As a result, there are too many unelected bureaucrats with goals that conflict with those of the common people. The existence of agencies like the Department of State, Department of Defense, the Department of Homeland security, the Central Intelligence Agency, and the National Security Agency complicate the field of foreign policy, and these agencies act too independently from the President. The use of torture can be considered another example of bureaucratic overreach in foreign policy. Here, both the CIA and DOD, operating independently, believed it appropriate to identify aggressive techniques that they could lawfully use to overcome detainee resistance to interrogation and sought legal counsel to do so. (Miles 2018) One possible solution to this would be for the head of these organizations to be nominated by Congress (some form of a compromise majority) and confirmed by the President rather than vice versa. This way, bureaucracies would have to look out for the interests of both the President and Congress. If a bureaucracy directly opposes the executive or legislative branch, the incentive to limit their power to an advisory role would increase.

Figure 2: how permanent member powers can be rotated while maintaining a general permanence in the UNSC 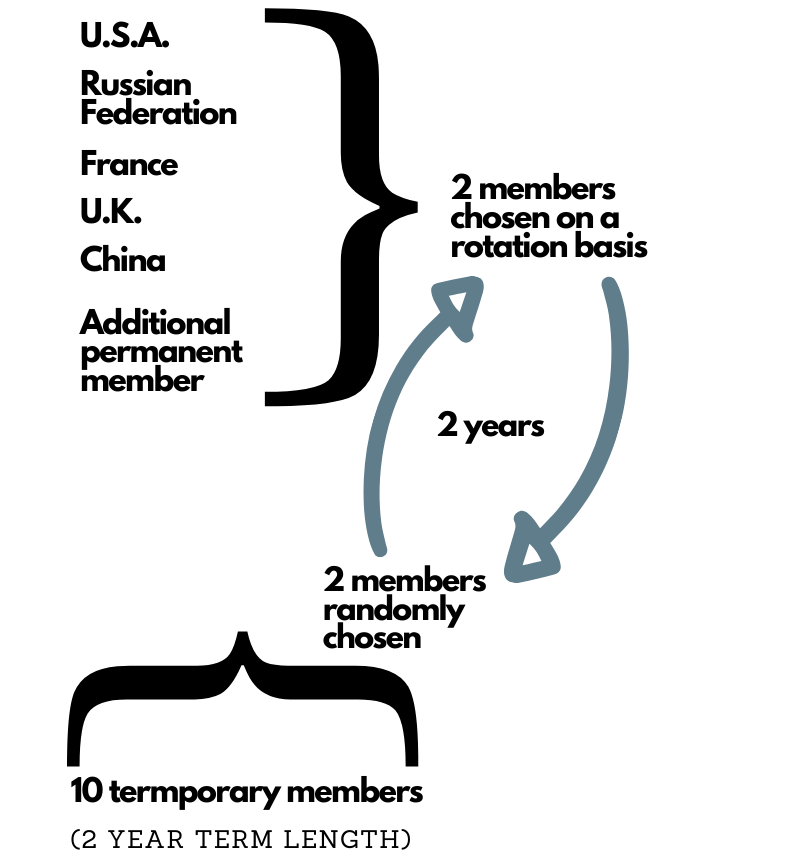 3. Breaking the permanent five of the UNSC/restricting the veto of the UNSC: The UNSC veto is NOT an unjust privilege for the permanent five members to enjoy. It restricts majority rule and unnecessary coalitions from forming in international affairs. However, if the same five nations are given this power indefinitely, the voting behavior of the organization may be skewed. This has been a cause of frustration for many member states. (United Nations 2018) In decisions where one or two nations of the permanent five are involved in the problem, the other nations of the permanent five should be allowed to restrict their veto if they unanimously agree upon it. Additionally, the permanent members should be expanded to six and two randomly selected members of the permanent members should step down on a term basis. The way this works would involve bunches of two members stepping down at a time as a permanent member for a 2 year term and being replaced by one of the 10 temporary members. See figure 2 above. This way each nation of the new permanent six will have no completely permanent position, but will maintain a general permanent presence in the permanent six. It should be noted that this proposal is very difficult to achieve. However, if America proposed this policy as the superpower they are, it would open up many doors for similar discussions in the U.N.

Bazzi, Mohamad. 2019. “America is likely complicit in war crimes in Yemen. It’s time to hold the U.S. to account.” The Guardian.

Borger, Julian, Bastien Inzaurralde, Cath Levett, Chris Newell, Finbarr Sheehy and Phil Maynard. 2015. “Vetoed! What’s wrong with the UN security council – and how it could do better.” The Guardian.

Goldsmith, Belinda. 2018. “Which are the world’s 10 most dangerous countries for women?”, Thomson Reuters.

Santhanam, Laura. 2016. “Which nations jail the most journalists?” PBS NewsHour.

United States Congress. Joint Resolution to authorize the use of United States Armed Forces against those responsible for the recent attacks launched against the United States. Public Law 107–40. Washington, DC. 2001