Classrooms are intended to be a safe space for students where they are able to learn efficiently, successfully and comfortably. Schools have the responsibility of ensuring that their students learn as much as possible during the school year in the most efficient and comfortable way. In the classroom, teachers have the responsibility of both teaching and connecting personally with each student in their class. The relationship between a teacher and their students is what helps students learn and thrive socially, and even more importantly, academically. The average number of students in elementary school classrooms has increased and continues to rise in the United States. Over the last 10 years, the average number of students per class has risen by almost two students (Digest of Education Statistics, 2018). This number is based on the student-teacher ratio in elementary school classrooms in the United States. The bigger a class is, the less individual help each student receives. Students in smaller classes have been proved to score better and create more meaningful relationships with their teacher and peers (Slavin, 2010). This memo will examine the problem of the increase of average class sizes in US elementary schools, what the current policy regarding this topic is and give two recommendations on how to solve the problem.

The problem of increasing class sizes has been seen across the United States. Since nearly every child in the United States is enrolled in some form of elementary school, this problem impacts almost all of them. This problem began due to the lack of funding for schools from all levels, federal, state and local taxes included. Since schools have an absence of funds, budget cuts have been necessary and often fall onto hiring and retaining fewer teachers while continuing to serve the same number of students. That decrease in teachers leads to an increase of the student to teacher ratio in classrooms. In terms of stakeholders in this problem, it is the government (federal, state and local) as well as taxpayers, school districts, schools, teachers and students. Those parties have a stake in both the problem and the potential policy solution.

Due to the structure of the school system and the US government, general school regulation and specific policies tend to be different state by state. There are numerous states that do already have policies in place that address class size issues (Education Commission of the States, 2016) but there are an even bigger percentage that do not. The map below shows the states ranked from most crowded classrooms to least crowded classrooms (Postma, 2020). 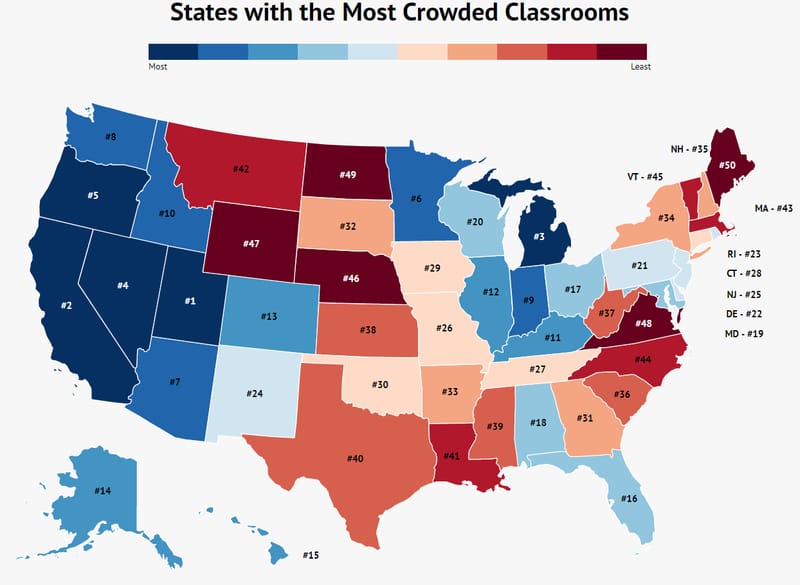 This map shows the classroom disparity has a large range from state to state. In the most crowded states, the average number of students per classroom is approximately 27 whereas in the least crowded states, the average is 17 (School and Staffing Survey, 2012). The positives of this delegation of policy making regarding schools is that states are able to create and implement policies that they deem necessary for their state. For example, in Texas’s class size regulation policy, they include a clause exempting schools with high migrant populations from the limits for short periods of time (Class Size Matters, 2016). The states’ ability to determine their own policies is also beneficial because it allows them to choose policies that are fiscally viable. There are also a number of weaknesses in the inconsistency regarding school policy and regulation. One negative is that since there is little federal guidance regarding class sizes, many states do not create or implement any policy because they do not have the funding to do so. Another issue is that it creates inequality in schools because some elementary schools, districts and states may have the funding and resources to create smaller class sizes while others do not. That fiscal disparity ultimately leads to a disparity in learning as well. By making a change, the government at all levels would be showing that they are prioritizing the education and wellbeing of their students.

The problem of large and continually increasing class sizes can be solved in two different ways that would both be successful and efficient. The first solution would be to hire more teachers. This solution would entail more teachers working at every school, therefore lowering the student-teacher ratio. To successfully implement this change, school districts would need more money to be able to hire, train and pay a higher number of teachers. The money necessary would come in part from tax dollars and in part from the federal government, and would fund the costs of more teachers and the costs of more classrooms, materials and space in each school. Hiring more teachers would also be beneficial because it would expand the amount of knowledge and collaboration on the teachers’ end. It would also create more classes which would make class sizes smaller, therefore solving the issue of the increasing class sizes in elementary schools in the US.

The second way to solve the problem of elementary school classes being too large would be to create recommended federal class size limits and implement them by state. This would involve the federal government creating the policy and encouraging states to implement it by tying implementation to grants that would help pay the costs of smaller classes. The costs would encompass getting more teachers, classrooms, resources and materials for the students. The benefits of this are that states would get some control over the implementation while still receiving guidance from the federal government. This alternative would ultimately lead to smaller classes in elementary schools across the United States.

By successfully making class sizes in elementary schools smaller, the students and teachers would benefit greatly. In a 2011 study, it was found that a decrease from an average class size of 22 to 15 was equal to about an additional 3 months of schooling in the long run (Chingos, Whitehurst, 2011). The significantly increased amount of learning in the smaller classroom compared to the average sized classroom justifies the expenses of the change. Students who are in smaller classes have been proven to have higher test scores and an overall more positive schooling experience. The impacts of smaller class sizes on students encompass more than just academics, they make the students better learners overall.

In conclusion, the problem of rising class sizes in elementary schools in the United States impacts almost all students. The best ways to solve this problem would be to hire more teachers or to create a federal grant program that is tied to class size limits. Schools are responsible for educating their students in the most effective way possible and by having smaller class sizes, they both give the students the opportunity to create better relationships with their teacher and peers, but they also give them a better academic experience because they receive more attention from their teacher.

Postma, A. (2020, July 14). 6 Feet Apart? States with the Most Crowded Classrooms. Zippia. https://www.zippia.com/advice/states-most-crowded-schools-largest-classes/.