Background: Antisemitism is on the rise

Sometimes referred to as “the world’s oldest hate,” antisemitism, hostility toward Jews, is a form of discrimination present in America’s political right and left wings, manifesting in the form of physical attacks and vandalization, dangerous Holocaust erasure, the conflation of Jews and the Israeli government, and harmful stereotyping and microaggressions. Despite making up less than 0.2% of the world population and only roughly 1.8 to 2.2% the U.S. population, Jews account for over 60% of religiously motivated hate crimes in the U.S. (Lugo et al.; Vital Statistics; FBI). The Pittsburgh Tree of Life shooting, Jersey City kosher supermarket shooting, Monsey, NY Hanukkah stabbing and Poway, California Chabad shooting are a few of the acts of blatant antisemitism committed within the last three years alone, and in 2019, antisemitic hate crimes hit a four-decade high (ADL, 2019).

Problem: Antisemitsm is prevalent in varying forms, stems in part from ignorance

Antisemitism is a complex form of hatred in that it exists in many variations. In the last year, the COVID-19 pandemic has unfurled new opportunities for antisemitism to fester. Some took to social media such as Twitter and Instagram to put a new spin on age-old tropes that Jews are controlling of global affairs and all powerful, with some claiming Holocaust survivor and billionaire George Soros or the Rothschild family had a part in creating the virus (ADL, 2020).  It has also allowed for the “zoom bombing” of virtual events, as was the case on a February call between University of Pittsburgh, University of Virginia, and Brandeis University educators discussing sexual and American Jewish history, during which antisemites interrupted to post swstikas and make antisemitic comments (Vellucci, 2021).

In the American political system, antisemitism is prevalent within parties on the left and right. The variety on the right often uses conspiracy theories or involves hate attacks, perpetuated by white nationalists and neo-Nazis. Republicans have played on tropes that Jews are greedy and all-powerful, like Marjorie Taylor Green’s claim that California wildfires were caused by space laser beams controlled by the Rothschilds. This kind of right-wing populist antisemitism is present at events like the 2017 Unite the Right march in Charlottesville, North Carolina, where extremists chanted “Jews will not replace us! You will not replace us!” and at this January’s riots on Capitol Hill, where domestic terrorists wore Auschwitz shirts, inappropriately used ceremonial shofars and hung up gallows.

Antisemitism on the left is sometimes less recognizable than that of the right, but is still a prominent threat. This kind of hostility often conflates the actions of Israel’s government with American Jews and excludes Jews from progressive spaces. Democrats have asserted the claim of Jews’ dual loyalty to America and Israel, such as when representative Ilhan Omar made comments suggesting the American Israel Public Affairs Committee (AIPAC) was purchasing support and that supporters of Israel were motivated by money and have an “allegiance to a foreign country” (Beauchamp, 2020; Beauchamp, 2019).

Furthermore, antisemitism exists in overstated Holocaust comparisons, which contribute to an erasure of the event and the idea that the Final Solution is the only time antisemitism was prevalent. Acts like Kristallnacht and the killing of Jews itself are used as political pawns in argument, as occured in January after media sites such as Twitter, Instagram, and Facebook banned former President Donald Trump, and Amazon, Apple and Google banned the popular far-right leaning app Parler from their platforms. Many used harmful Holocaust comparisons to make a point about censorship—conservative Glenn Beck told Fox News that the ban was like a“digital ghetto,” similar to “the Germans with the Jews behind the wall,” with former Iowa Republican Congressman Steve King and Fox News’ Jeanine Pirro making similar comparisons (Abu, 2021; Klein; 2021). While these comparisons might help make a fleeting punchline, they also make it easy to forget the deeply systematic actions and unchecked government power that led to the murder of two out of every three European Jews during the Nazi regime (United States Holocaust Memorial Museum).

While anti-zionist based antisemitism, Holocaust denial, and antisemitic tropes of power, disloyalty, greed, deicide, and blood libel differ in format, they all stem in part from a general lack of education about Jews. A survey of 1,000 millennial and Generation Z Americans across 50 states found that 63% of those surveyed didn’t know six million Jews were killed, with 36% estimating it to be lower than two million, and 48% of respondents couldn’t name a concentration camp or ghetto, despite there being more than 40,000 camps and ghettos in Europe during the Holocaust (Holocaust Knowledge and Awareness, 2020). Furthermore, a survey on perception of antisemitism in America’s population found massive discrepancy in answers between Jews and the general public, finding that only three in five U.S. adults view antisemitism as a problem compared to nine in 10 Jewish Americans (Mayer, 2020). Just as concerning is that almost half of Americans are not familiar with the term “antisemitism,” with 25% of respondents saying they had never heard of it before. The report found strong correlation between education levels and familiarity with the term, with college graduates scoring 52% higher than those who only had a high school diploma (Mayer, 2020). 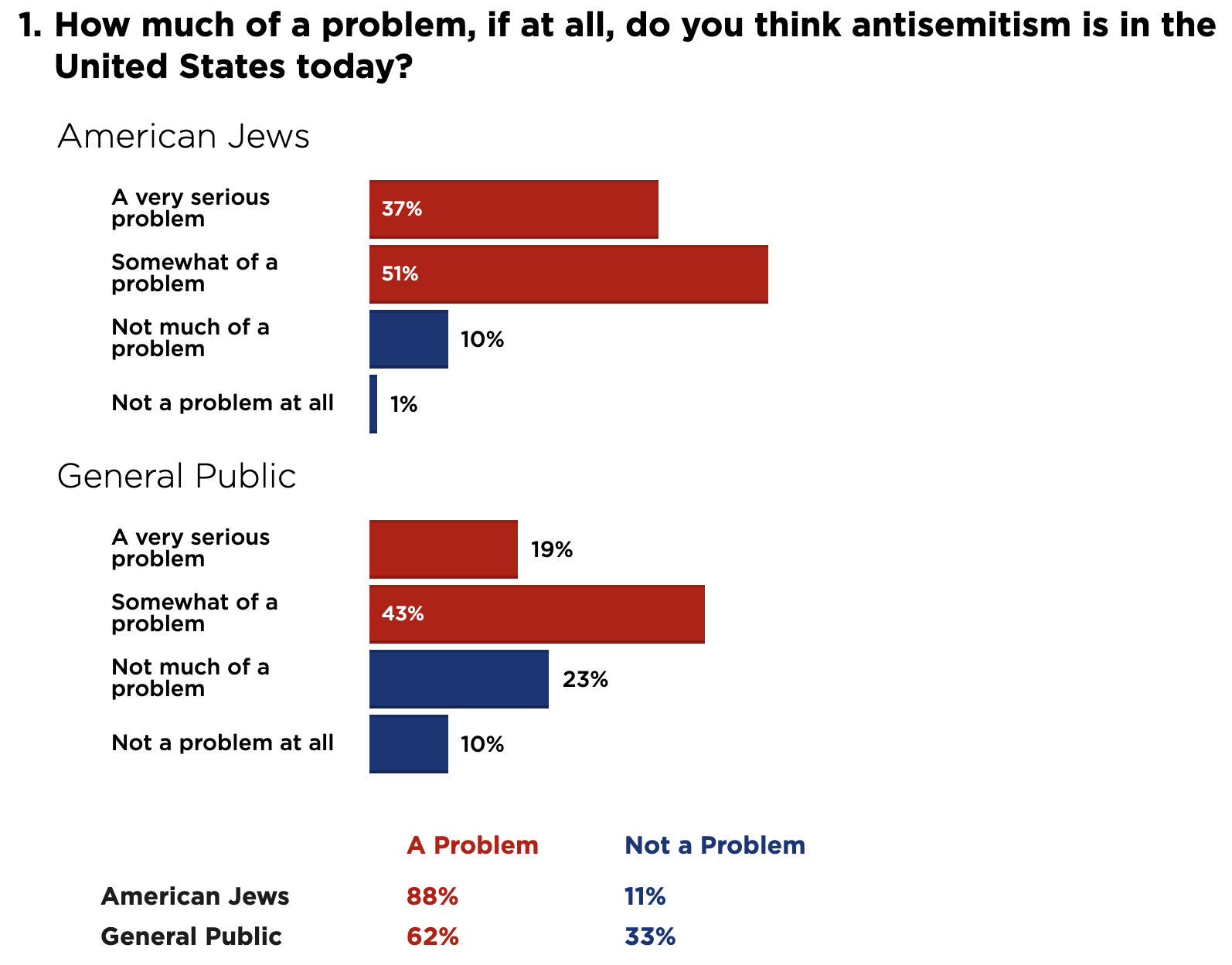 When education fails students, this lack of knowledge carries into adulthood. A Pew Research survey of U.S. adults found similar statistics to the one of younger Americans, sharing that 55% of those surveyed didn’t know six million Jews were killed, with 15% estimating it to be lower than three million (Pew Research, 2020). Still, this report also found that those who underestimated the Holocaust’s death toll are not necessarily Holocaust deniers with antisemitic views, with 90% of those who underestimated the count exhibiting neutral or warm feelings towards Jews. However, a higher score accuracy regarding the events of the Holocaust was correlated with warmer feelings toward Jews, indicating that misunderstanding of the Holocaust and stems at least in part from a lack of education as opposed to inherent hatred. These findings indicate that education on antisemitism is crucial, and that it is necessary to start at a young age.

Figure 2: “What Americans Know About the Holocaust” Pew Research, 2020.

Proposed Solution: The state of Wisconsin should require antisemitism education

The Wisconsin Standards for Social Studies should update their historically marginalized groups list for teaching, “groups defined by race, gender, ethnicity, language, ability, sexual orientation, family background, and/or family income” to also include religion (Wisconsin Standards for Social Studies, 2018). Including religion would allow for antisemitism curriculum guided toward junior high and high school students based on three components: the implications of the Holocaust, antisemitic ideology and expression, and antisemitism related to Israel. These suggestions are also aided by Dr. Jamie Levine Daniel, Dr. Rachel Fyall, and Dr. Jodi Benenson’s Journal of Public Affairs Education report “Talking about antisemitism in MPA classrooms and beyond.” The Milkwalkee Jewish Federation’s Jewish Museum of Milwaukee and Nathan and Esther Pelz Holocaust Education Resource are Wisconsin’s leaders in combatting antisemitism, and their resources on field trips and Holocaust educator programs should be used in combination with that of the United States Holocaust Memorial Museum and the ADL. Other resources to base education around include the Cohen Center for Modern Jewish Studies, Steinhardt Social Research Institute, Hadassah-Brandeis Institute, Institute for the Study of Contemporary Antisemitism, and Mandel Center for Studies in Jewish Education (Daniel, 2019). By aligning this curriculum within teaching of anti-discrimination, students can understand the context of antisemitism as a current day issue instead of an isolated event of the past.

The Holocaust portion would educate not only on the cruel conditions Jews endured during the Holocaust, but on the general public’s role in the Holocaust, including the racial science methodology of the Nazi party and the U.S. government’s apathy and restrictive quotas on Jewish immigration. The curriculum should utilize survivor testimonies from the Holocaust Memorial Museum’s archives of reflections and literature such as Night by Elie Wiesel and Anne Frank’s diary. Furthermore, the dangers of Holocaust denial and its perpetrators, as well as the harm of unnecessary Holocaust comparisons, should be discussed. The United States Holocaust Memorial Museum and the ADL provide a series of lesson plans to build upon, including the understanding of Nazi symbols, racial law in Nazi Germany, the connection between anti-Black racism and antisemitism, and confronting antisemitism.

Antisemitic ideology and expression should be taught based on the International Holocaust Remembrance Alliance’s (IHRA) working definition of antisemitism and explain the manifestation of antisemitism in America’s political right and left. Some of the stereotypes and rhetoric commonly used against Jews include the conspiracy that Jews have excessive power over international affairs, the economy, and Hollywood, the myth that Jews are disloyal, the stereotype of Jewish greed, the myth that Jews collectively murdered Jesus (deicide) and the myth that Jews murder non-Jews to use their blood for ritual purposes (blood libel). This should be taught through analysis of the antisemitic propaganda used during Nazi Germany, of the property ownership restrictions and immigration and enrollment quotas that impacted American Jews, by politicians on the left and right, and in everyday media and television.

To understand antisemitism related to Israel, this element of the curriculum should include a historical overview of the Israeli-Palestinian conflict that explains both zionism and Palestinian rights and subsequent movents such as The Boycott, Divestment and Sanctions movement (BDS). While the conflict is complicated, it is crucial that educators define the difference between valid criticism of government and holding Israel to a higher standard than other countries or conflating its government’s actions with American Jews. This section should also use the IHRA’s working definition of antisemitism as a guideline, which outlines some of implications of anti-zionist based antisemitism, including accusing the Jews or Israel of exaggerating the Holocaust, accusing Jewish Americans of being more loyal to Israel, denying the Jewish people’s right to self-determination, and using antisemitic symbols to describe Israel, among other ramifications.

Much of current antisemitism curriculum fails in that it is taught only as a stagnant part of history occurring between the years of the Holocaust centered around the later 1930s and early 1940s. One example Daniel brings up is the “index of Adams & Balfour’s Unmasking Administrative Evil (2015), the entry for antisemitism reads, ‘Antisemitism. See Holocaust and public affairs’” (Daniel, 2019). In reality, antisemitism has reached the highest levels since the Holocaust in this past decade, indicating antisemitism needs to be taught in a comprehensive sense with emphasis on its continual harm to Jews (ADL, 2020). There are currently 17 states that require public schools to provide Holocaust education, with legislation varying and giving minimal directions (United States Holocaust Memorial Museum). Wisconsin has not yet implemented Holocaust legislation, though assembly bill 816 would mandate “instruction on the Holocaust and other genocides in its respective curriculum at least once in grades 5 to 8 and once in grades 9 to 12” (Wisconsin Legislature, 2020). The bill currently awaits a vote in the state assembly. This is promising, but it is crucial for the state of Wisconsin to take curriculum a step forward and include teaching of antisemitism in their standards for social studies.

Curriculum needs to expand beyond acts of antisemitism that are purely ones of violence and explain the harm of white supremacy to the general public. Overall, understanding the different forms antisemitism can take on (both overt and hidden) help us understand how deeply ingrained hatred against Jews is to American culture. By informing students of the dangers of prejudice from a young age, this curriculum can help foster an environment of acceptance and understanding instead of ignorance.