Problem Statement: The Clogged Antibiotic PipelineThis past year, the World Health Organization (WHO) warned that current development of antibiotics is insufficient (WHO). Essentially, the lack in investment return lies at the root of the problem. Due to a lack of potential revenue, the investments being made by pharmaceutical companies have substantially declined in recent years (Projan). Consequently, the lack of funding and investment into new innovation has allowed antibiotic resistance to outpace the production of new antibiotics that are effective in combating the resistance (Ventola). It is in the best interest for United States government officials to promote antibiotic drug development and to make it a priority in order to increase the diminishing supply of effective antibiotics in an effort to help the 2.8 million people in the US, who suffer from antibiotic- resistant infections each year (CDC).

Antibiotics are a type of antimicrobial. Antimicrobial resistance is an umbrella term for when “microorganisms including bacteria, viruses, fungi, and parasites become able to adapt and grow in the presence of medications that once impacted them,” (Dadgostar). It is important to note that many individuals and scientists use the terms antimicrobial and antibiotic fairly interchangeably and much of the research on these is applicable to both (Ventola). Throughout history almost all antibiotics that have been introduced have suffered and become ineffective due to drug-resistant bacteria (Ventola). As seen in Figure 1, after the heightened dedication to antibiotic drug development in the 1960-1980s, the number of new antibiotics being introduced has dramatically declined (Ventola). 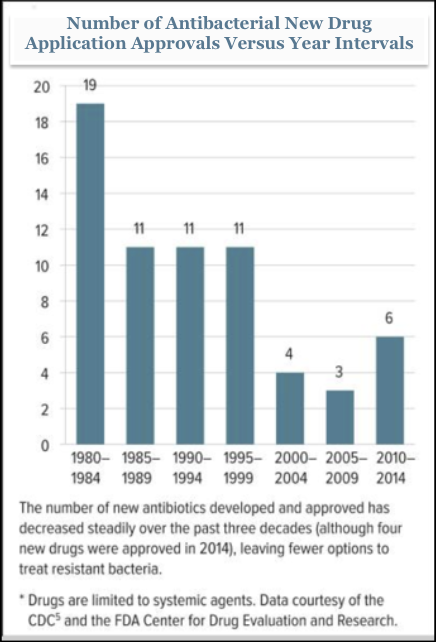 Why Aren’t Antibiotics Being Developed?

The Center for Disease Control (CDC) estimates that at least 2.8 million people across America suffer from antibiotic resistance annually (CDC). With that data, it seems like pharmaceutical companies would be eager to produce new antibiotics due to the size of the market available. Although, there are a multitude of reasons that pharmaceutical companies have steered clear of developing these necessary drugs. Specifically, there are three main reasons that these drugs are not being developed at the rate to combat the public health crisis. The most impactful reason is the costliness of development of antibiotics. It is estimated that it takes pharmaceutical companies approximately $1 billion to research, develop, and produce a new antibiotic (CDC). Additionally, it takes between 10 and 15 years to go through research, clinical trials, and the Federal Drug Administration’s (FDA) approval process (WHO). Lastly, after all of the investments made, both in time and money, the estimated failure rate for antibiotic development is 95% (WHO). The costs to develop antibiotics when compared to the projected profit from a successful antibiotic leads to a likely loss of money (Dadgostar). Thus, many pharmaceutical companies view the development of antibiotics as large and risky, just to have “superbugs mutate and resist the new [short course therapy] drugs,” (Ventola).

The aim of this policy is to incentivize and support pharmaceutical companies and medical researchers in the search and development of new antibiotics that can fight against emerging drug-resistant bacteria. At the same time, it is important to make sure there remains equitable access to antibiotics, and that the prices do not spike to a spot where the consumers and patients who need them most cannot access or afford them. Overall, the main aim of this policy is to save lives and reduce the number of people who suffer from antibiotic resistance, while ensuring that newly developed antibiotics remain accessible.

This issue has been building up for some time and while some proposals have been made, still, little success has been made towards achieving the goal of producing a greater number of innovative and new antibiotic drugs. The most productive way to solve the crisis would be to create a policy geared towards increasing incentives for pharmaceutical companies to create antibiotic drugs. In the past, most support for antibiotic development and research has stemmed from the private sector, as well as Non-governmental organizations. Recently, the WHO created their “Priority Pathogen List,” which helps identify which antibiotics are most needed to combat sickness (WHO). Additionally, the Drugs for Neglected Diseases Initiative and the WHO have worked together in a joint effort to create GARDP: “a not-for-profit organization that develops new treatments to fight drug-resistant infections that pose the greatest threat to health, while working to ensure responsible use and sustainable access,” (DNDi).

Governmental efforts increased recently, and in 2019, the FDA implemented a more straight-lined process for the approval of antibiotics (Gotham). The sped-up process incentivizes pharmaceutical companies by allowing them to get their products to the market and to make a profit more quickly. Furthermore, in 2020, the PASTEUR (Pioneering Antimicrobial Subscriptions to End Upsurging Resistance) Act was proposed in the Senate in September, and in the House of Representatives in December, although it is still waiting for approval. The PASTEUR Act was proposed to provide contracts for selected new antimicrobials which have been identified as high-need (Gotham). The contracts give pharmaceutical companies who successfully follow through with the development and production of antimicrobials and antibiotics a minimum guaranteed revenue over 5+ years (Gotham). The bill, which has bipartisan support, aims to tackle the antibiotic public health crisis much similar to how Operation Warp Speed was enacted to fight the Covid-19 pandemic (116th Congress; Slaoui). The last action taken with the PASTEUR Act was on December 9, 2020 in which it was referred to various committees for review (116th Congress). Operation Warp Speed designated approximately 18- billion dollars from the US government to support the development of Covid-19 vaccines; similarly, the PASTEUR Act dedicates 11- billion dollars towards antibiotic development and research (116th Congress; Slaoui). The  PASTEUR Act provides economic incentives and support for pharmaceutical companies, many of which have turned away from the market solely on the basis of not getting enough return on their investments (Årdal; 116th Congress). Therefore, the sponsors of the act are hopeful that providing a guaranteed return on their investment will have been comparably as effective as Operation Warp Speed was for Covid-19 vaccine development (116th Congress; Slaoui). Further, access to antibiotics will not be an issue under the PASTEUR Act, as it is designed so that in exchange for the US government’s financial support, pharmaceutical companies agree to keep prices affordable for patients (116th Congress). The largest drawback of the PASTEUR Act is that for the government to invest and designate money to go towards antimicrobial development. Congress needs to work together with the Department of Health and Human Services, specifically the CDC and NIH, to review available research grants and designate a portion of them specifically towards antibiotics.

While smaller than the pharmaceutical market, the market for the development for Orphan drugs has had similar problems in terms of interest by pharmaceutical companies. Orphan drugs are drugs that treat rare diseases and illnesses, which are quantified by having less than 200,000 individuals diagnosed with the given illness. The market for Orphan drugs was also seen by pharmaceutical companies as a bad market for making a profit, due to the limited size of the market, as well as the cost of researching and producing drugs for rare illnesses (Sarpatwari). Once incentives from the US government were introduced to the market, a dramatic increase in the development of new Orphan drugs was seen (Sarpatwari). The main incentive presented for the market of Orphan drugs was an extended patent of 7 years(Sarpatwari). Similarly, in 2012, the GAIN Act was passed to allow for 5 years of additional market exclusivity for new antibiotics (Gotham). While following the passage of the GAIN Act a handful of antibiotics were produced and approved in 2014, there still is not substantial enough of a shift in the market towards increased development (Ventola). Another issue in regards to the sole reliance of producing incentives through patent protection such as the GAIN Act, is that it limits competition within the market between pharmaceutical companies. In turn, limiting competition within a market typically drives up prices and limits interest development (Gotham). The GAIN Act has not proven to be effective enough at increasing the development of antibiotics, although because of the lengthy process of antibiotic development, it is hard to tell the impact it has on the market quite so soon (Gotham; WHO). Secondly, patent protection does not do much if their product will naturally become ineffective due to drug-resistant bacteria. In essence, patented antibiotics will not make a profit if they stop working, and as a result would make the extended patent virtually worthless and not much of an incentive after all.

Currently, antibiotic development mostly stems from private investments, but an increased investment from the government will greatly incentivize and help to increase interest in the development of these drugs. With that said, after reviewing the options, my recommendation is to expand upon systems similar to those currently in practice, including the GAIN Act and the newly implemented speed-lined FDA approval process. In order to return the antibiotic drug market to normalcy, it is necessary to increase incentives for pharmaceutical companies to develop antibiotics, and ensure that the drugs remain at an accessible price for the consumer. With more data available on the effectiveness of the GAIN Act in increasing the development of new antibiotics, or lack thereof, and the other effects such as price hikes for antibiotic drugs, it is possible to have adverse effects towards our goals for this policy. Instead, based on the newly identifiable and quantifiable success of Operation Warp Speed, for the Covid-19 vaccine research and development, the passage of the PASTEUR Act projects the most positive impact on the market. Also similar to speed-lined authorizations involved with the Operation Warp Speed initiatives, the newly shortened FDA approval process should further the effectiveness, as well as speed up the impact of the PASTEUR Act. For Covid-19 vaccines, such as Pfizer and Moderna, the government was able to invoke an Emergency Use Authorization without the vaccines going through full FDA approval. While the magnitude and level of emergency of antibiotic development may not be as great, the tool could potentially be utilized to speedline the process of getting antibiotics out once they are developed, in an effort to unclog the antibiotic pipeline even if they do not need to be enacted with as extreme urgency. Although it is costly, the investment by the government, through the PASTEUR Act, towards developing antibiotics will save money in fighting the costly public health crisis in the long term. Additionally, it will aid in fixing the market, in the long term both for the pharmaceutical companies as well as the consumer (Dadgostar). Along with these strides in remedying the antibiotic crisis, by increasing effective research, in turn the robustness of the healthcare infrastructure will also increase, improving health and access to sufficient treatment to citizens across the country and in local communities (NCBI). By repairing the market before it gets worse, there is more hope that the crisis can be controlled (Gotham). The reintroduction in the new congress and the passage of the PASTEUR Act, combined with continued efforts from the private sector and NGOs will help to restore the failing antibiotic market, and in turn aid in a solution to the public health crisis. The revenue for pharmaceutical companies from the PASTEUR Act, along with a shorter approval process from the FDA will increasingly support companies in the market, as well as more quickly get new antibiotics out to the consumer, in an effort to combat increasingly drug resistant strains of bacteria.

WHO. “In the Face of Slow Progress, WHO Offers a New Tool and Sets a Target to Accelerate Action against Antimicrobial Resistance.” Who.int, World Health Organization: WHO, 18 June 2019, www.who.int/news/item/18-06-2019-in-the-face-of-slow-progress-who-offers-a-new-tool-and-sets-a-target-to-accelerate-action-against-antimicrobial-resistance. Accessed 21 Feb. 2021.