Madison, Wisconsin is home to over 250,000, with approximately half living in some form of rental housing (Equitable Development). However, rent prices have been increasing at a rate that vastly outpaces both inflation and net worth increases. With the city’s own government predicting a population growth of 70,000 people by 2045, it is important to address the issue of rent increase now before the rental market is further strained by future population growth. (Equitable Development, 18).

From 2010 to 2017, the average rent in Madison increased by 19%. Yet the net worth of an average household increased by only 13%. With both of these numbers being adjusted for inflation, it is clear that the rate at which rent is increasing in the city is outpacing the rate at which household income grows. These averaged numbers do not paint the full relationship between rent and income, though. 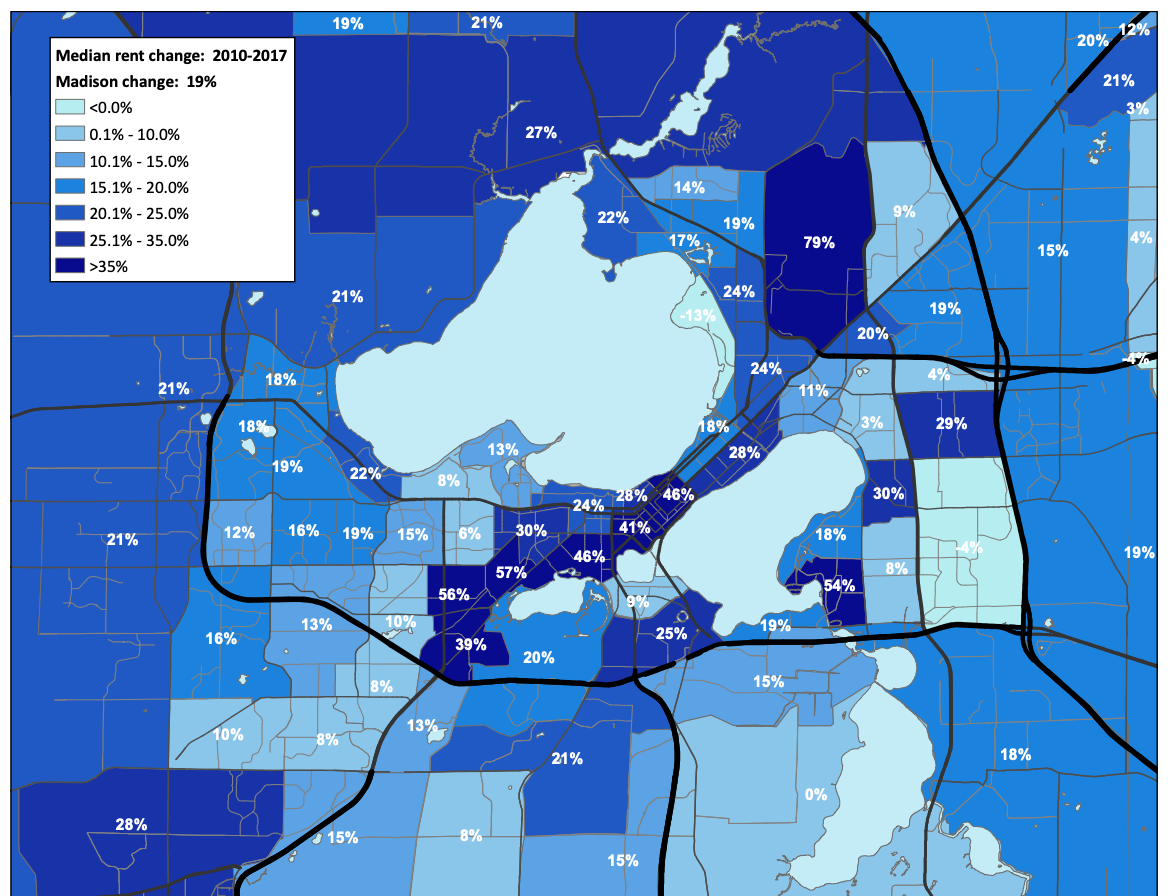 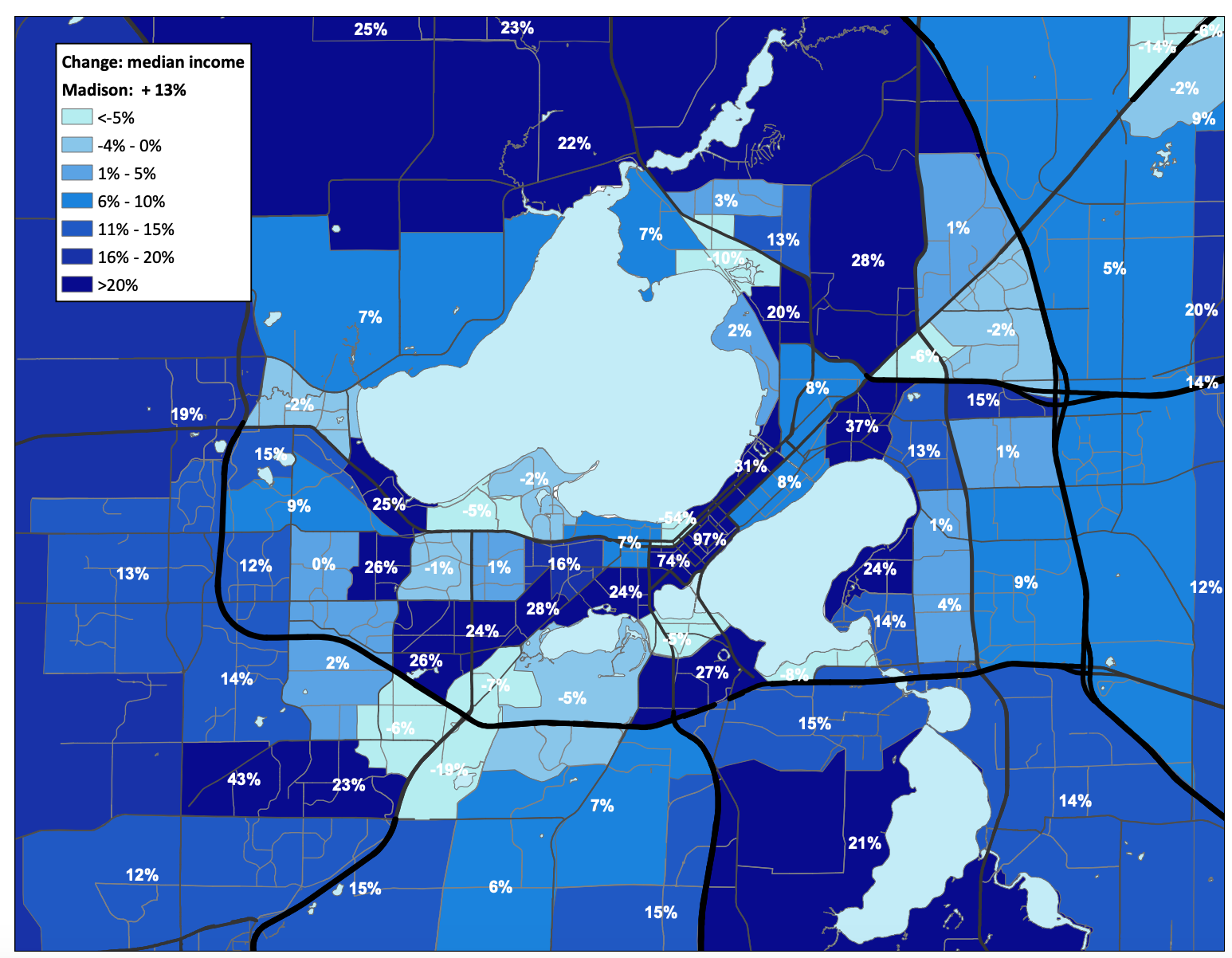 Figures A & B: Median Rent Change and Median Income

The two images above show a more detailed account of changes to rent (top) and income (bottom) in Madison. Instead of looking at the citywide numbers, these maps look at the data on a neighborhood, or census tract basis. Excluding a few outliers, almost every neighborhood in Madison has experienced rents rising faster than median income. Rent rising leaves two options for those whose income is not increasing at a comparable rate: find a cheaper place to live, or become increasingly rent burdened.

A person who is “rent-burdened” spends a higher percentage of their income on housing costs. The U.S. Department of Housing and Urban Development considers anyone who spends more than 30% of their income on housing costs, including rent, to be burdened (HUD). Looking at the most recent US Census numbers from 2019, the median gross rent in Madison was $1,118. The median household income during the same year was $65,332 (CENSUS). This would mean that the rent burden of someone exactly at the median of both numbers would have a pre-tax rent burden of about 20%. For people earning below the median income, though, rent burden can be a much larger problem.

Rising rents put middle housing at risk, or what current mayor of Madison Satya Rhodes-Conway explains as the “missing middle”. In a blog post, Mayor Rhodes-Conways explains that the missing middle refers to “smaller, multifamily options,”(Rhodes-Conway). These housing options typically lie somewhere between low-cost, small rental housing and homeownership, and are essential to the housing market.

Rent control is a well-known tool when fighting rising rent costs. Instituting a rent cap makes it so landlords or other renters are unable to raise the rent past a certain amount, typically based off the median wage in a city or neighborhood. In Wisconsin, though, municipalities are forbidden through state statute to enact any sort of rent control (Wis. Statute § 66.1015). Thus, Madison has worked to find other avenues of combatting increasing rent costs.

One such effort is taking advantage of the federal Housing Choice Voucher Program, sometimes referred to as Section 8. Through this program, the Madison Community Development Authority distributes federal funds to low-income renters. The Madison Housing Authority states that around 1600 households receive Section 8 assistance. The money is allocated to renters on a waiting list via a lottery. These renters must still dedicate 30% of their household income towards rent, with the section 8 money paying the remaining rent (Section 8; Affordable Housing FAQ). While this would help the extremely rent-burdened, it is important to note that the amount a renter must pay every month before the voucher takes effect is still enough to consider the renter rent-burdened.

Current Mayor of Madison Satya Rhodes-Conway has proposed alternate solutions to housing problems, with emphasis placed on resident ownership models of housing. Housing cooperatives are living arrangements wherein the residents of a house or building collectively own the property. The Mayor’s Office recently updated the zoning requirements to allow cooperative housing anywhere that is zoned for residential use(Rhodes-Conway). This essentially removes a handicap in the development of cooperative housing.

To fix the problem of “the missing middle”, the city of Madison should create a second community trust that would be funded by a novel rental license. However, instead of buying up land to build affordable housing, this trust should be used to purchase already extant “middle housing” rental buildings in the Madison area. These buildings that are or were home to rent-paying tenants can be bought by the community trust, which can then continue to administer the rental housing. The trust would rent units out without any profit incentive, meaning that all rental revenue would be going towards the costs, upkeep, and maintenance of the property.

This, undoubtedly, would be a large financial investment for the city. However, there are untapped sources of revenue that could be allocated to this trust. The city of Madison currently has no licensing requirements for rentals excluding short term lodging like hotels (Madison DPCED). Rental licensing is a common way for cities and municipalities to have a central record of rentals in the city, though the city of Madison has no such requirement. Instituting a rental license in Madison would not only make it easier for the city to administer housing and enforce housing codes as it will have rental information centralized, but it would also provide a stream of revenue which could be directed towards a second community land trust. The city states that the regulation and licensing of short term rentals is necessary to mitigate short term rentals’ effects on neighboring property owners, neighborhoods’ characters, and the stock of affordable housing (ibid). These exact same justifications could be applied to the licensing of other rental properties.

The fees, and thus the revenue raised from them, would be decided by the city government. Higher fees would provide more funding for the second community trust, but would also mean more political pushback. Getting the licensing structure in place initially should be the top priority, and lower fees would allow the city government more flexibility in the future: certain fees can be raised or lowered as a response to budgetary or regulatory circumstances. This stream of revenue, however, would serve as the basis for a new community trust that would provide affordable, middle-housing to Madisonians.

City of Madison Planning Department. Equitable Development in Madison: an assessment of factors contributing to displacement and gentrification. 19 Nov. 2019.