In the Post 9/11 Era, terrorism has been at the forefront of the American consciousness. However, much of the perceptions of who is committing terrorism seem to be misplaced, with polling showing that Americans are far more likelier to call an act “terrorism” if it is committed by someone who is a Muslim than similar acts committed by Whites (Frankovic). The Department of Homeland Security (DHS) has called white supremacy the deadliest terror threat the US faces in their most recent threat assessment (Sands). Data also shows that far-right extremism, comprising of white supremacy, has accounted for the majority of all terrorist attacks since 1994, with the number of said attacks increasing significantly within the last 6 years (Jones). The US must address this problem of growing domestic terrorism, especially the increasingly common far right extremism. My proposal seeks to redistribute funds allocated to the War on Terror and international terrorism, and use those funds to increase domestic counterterrorism efforts in pre-existing institutions.

The FBI and DHS are the two agencies tasked with counterterrorism efforts in the US. To adequately address this issue fully, both budgets for the FBI and DHS will be analyzed. In quantifying these budgets, only spending which directly advanced domestic counterterrorism measures, were used, with only an approximation of spending given.  Further overspending analysis will also directly rely on the estimates as found by Mueller and Stewart (2012).

DHS, as of 2021, will have a total budget authority of $75 billion, with $80 million program enhancement funds for “prevention and protection” (Department of Homeland Security). Similar to the analysis of the FBI’s budget, it is unreasonable to assume all of these funds are used in counterterrorism efforts. However, counterterrorism efforts are often a subcomponent of every aspect the DHS sets to cover, from US Customs and Border Protection to the Federal Emergency Management Agency (FEMA). To make this analysis as realistic to funds available for counterterrorism, I only incorporated 6 subunits of the DHS, all explicitly handling domestic counterterrorism in some capacity, and found that this budget is approximately $2.42 billion. In this calculation, it is important to note that I did not include FEMA’s available funds of $14.5 billion. While these funds may be made available after a terror attack, they do not provide an advance in counterterrorism efforts. Together, these two agencies who lead the brunt of domestic counterterrorism work, share a budget of approximately $2.428 billion. In comparison, new estimates place a price tag on the War on Terror at $6.4 trillion, with a large defense budget and Overseas Contingency Operation (OCO) funding remaining high at over $700 billion for 2020 (Crawford; Garamone).

My policy proposal seeks to adjust our current funding to more accurately match the data on the ground. The Figure below shows the number of attacks and plots by perpetrator orientation, ranging from 1994-2019. The data makes clear that right-wing terrorism accounts for the majority of all incidents, with a high of 53 attacks in 2017. 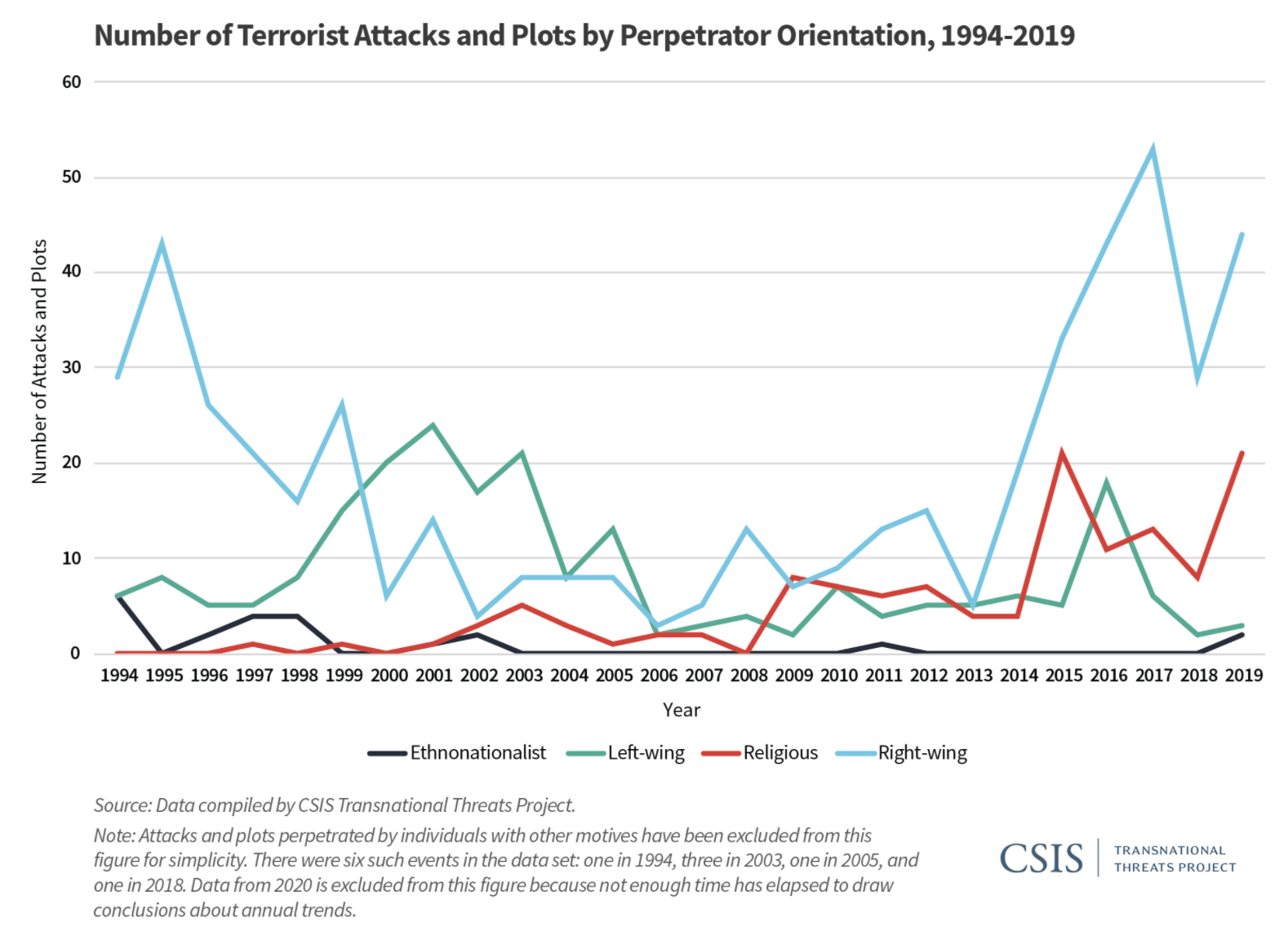 The figure also shows that those attacks committed by right-wing terrorists have increased in number significantly over the last 6 years. In contrast, religious orientation attacks are those that include violence in support of a faith-based belief system, such as Judaism, Chrisitinaity, etc. The primary attacks from this group comes from Salafi-Jihadists inspired by the Islamic State and al-Qaeda (Jones). The data shows that even in the most active period, around 2015, these actors did not come close to the number of attacks attributed to right-wing extremists. However, while domestic attacks have increased by the far right, our spending as it relates to counterterrorism, has continued to be focused on international terrorist organizations such as ISIS. Not only does the US currently overspend on this front, but in doing so it also reinforces racial biases, places overseas troops at risk, and continues to haphazardly form our foreign policy in the Middle East (Frankovic).

A study conducted by Mueller and Stewart sought to calculate America’s disproportionate spending as it related to the threat posed by al-Qaeda. In doing so, they used a cost-benefit analysis with spending comprising $75 billion per year (in 2012) for enhanced security expenditures, not factoring in war cost, and found that that level of spending would be adequate if it were to stop 333 very large attacks (Mueller and Stewart). In short, this simple calculation is meant to show the ridiculous overspending the US has engaged to tackle the threat of radical Islamist.

As a starting point, defense spending should be significantly lowered, with those funds going towards domestic counterterrorism measures. A decrease of just 1% in current defense spending would add a minimum $7 billion to domestic counterterrorism spending, doubling the current spending as calculated previously. Doing so would be correctly mimicking the European response, where countries such as the UK have redirected resources to focus on right wing terrorist (Jones). Law enforcement agencies can mobilize under existing laws and use similar models to destablilizing jihadist groups such as al-Qaeda and ISIS in order to combat domestic terrorism (Narea). The US also has a wide array of laws and statutes that it can use at its disposal. Prosecuting terrorists is not the issue here, rather, trying to prevent attacks has seemed to become more unlikelier. This redistribution of funds seeks to begin to level this discrepancy.

This reallocation of funds may offer the most practical way forward in trying to combat the rising threat of domestic right wing extremism. These funds should be used directly in our leading counterterrorism law enforcement offices, the FBI and DHS, as well as be made available to state and local entities as the FBI and DHS see fit. While a lack of funds is not the only issue combatting our stifling domestic counterterrorism, it is an area which can provide immediate support. In advocating this policy, the US would be providing the necessary groundwork to fight right wing extremism in more advanced and successful ways, as well address the disparities which have plagued its counterterrorism goals.

Frankovic, K. (2019). What is terrorism? For Americans, who matters more than what. https://today.yougov.com/topics/politics/articles-reports/2019/03/26/terrorism-in-america-constitutional-rights.