Adverse Childhood Experiences are situations or conditions during formative years resulting in toxic stress and are also referred to as ACEs. Up to 60% of adults in Wisconsin report having experienced at least one ACE while growing up. (Resilient Wisconsin: Adverse Childhood Experiences). Examples of ACEs include witnessing domestic violence, physical or emotional child abuse, parental substance abuse, and parental mental illness, among others. There is a vast range of ways that ACEs can negatively impact health as a person grows up. They put individuals at increased risk for developing mental health disorders, particularly anxiety and depression. They also lead to poor physical health outcomes such as obesity, heart disease, diabetes, and stroke (CVA) through various physiological pathways. Finally, they can lead to negative behavioral health outcomes that result in spillover costs to society such as increased rates of substance abuse disorders, experiencing or inflicting domestic violence, participating in violent behaviors outside the home, and incarceration.

While the initial investment in these programs is substantial, the high number of negative consequences from ACEs and benefits to society from ACE prevention demand that governments allocate additional funding and support policies that work to prevent ACEs and increase the resilience of children against these traumas. Current legislation in Wisconsin focusing on the prevention and remediation of ACEs does not go far enough to address the vast impact that ACEs have on the children of Wisconsin and their futures. There are two major acts in Wisconsin State Legislation that address ACEs and their impacts on Wisconsinites. The first is Wisconsin Statute § 48.545, commonly known as the Brighter Futures Initiative. This initiative awards approximately 2.1 million dollars to programs that combat juvenile delinquency in counties with populations of 750,000 or more. It awards about 1.7 million to similar programs in any county with a lower population. The main purpose of this initiative is for counties to create programs that promote ACE awareness training. This initiative provides an option to distribute this money to programs for the prevention of ACEs in children ages 0-8 (Wisconsin Statute § 48.545). This optional allocation of funding is problematic because counties may not utilize this money for its intended purpose.

The second major act in Wisconsin State Legislation that addresses ACEs is Senate Joint Resolution 59. This resolution simply states that policies implemented by the state of Wisconsin will acknowledge the impact of ACEs and take those impacts into account when new policies are being formed (Wisconsin Legislature: SJR59). The problematic factor of this resolution is that it is fairly non-specific. There are no clear guidelines that dictate how policies will take ACE impacts into account. It is not an action-oriented statement and leaves room for complacency on an urgent issue. 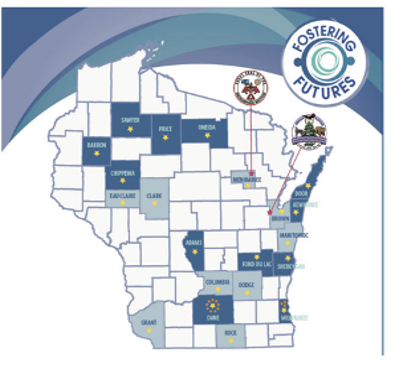 There are a few promising state funded programs and initiatives such as the Fostering Futures Initiative, The Wisconsin Trauma Project, and the Wisconsin Office of Children’s Mental Health Collective Initiative. These programs promote resilience development in children, trauma-informed care, and recognition of manifestations of ACEs in adults. However, these programs are underfunded and thus are not able to operate at their full potential. In addition, as seen in Figure 1, branches of these programs do not exist in every county and participation in these programs by counties is optional. Greater support for these programs will positively impact the physical health, economic productivity, criminal activity, and mental/behavioral health in Wisconsin. Indirectly, addressing ACEs through policy will work to correct health inequities of people of color, women, and those living in poverty (ACEs).

There are also factors to consider concerning people of color in interacting with law enforcement. These have been magnified throughout 2020 and 2021, especially in the case of George Floyd. Law enforcement officers often have inherent biases against individuals of color due to systemic factors promoting racism in the criminal justice system.

Again, because of this, as well as potential past interactions with law enforcement by either themselves or their families, people of color may have negative views of law enforcement. As shown in Figures 2 and 3, those in poverty and people of color experience ACEs at higher rates than the general population. This leads to an incohesive relationship between those experiencing ACE consequences and those charged with dealing with these impacts. 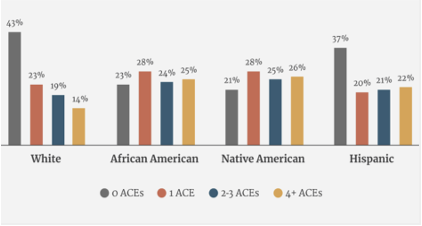 Incorporating the criminal justice system with programs that address the consequences of ACEs often results in the formation of criminal records and intervention is often late in childhood, which is less than ideal. This intertwining relationship is unnecessary and dealing with law enforcement could exacerbate or create trauma for many individuals. This can lead to further ACE effects, parental incarceration, and perpetuation of systemic racism in Wisconsin society.

ACEs result in differences in cognitive development which can lead to unhealthy coping mechanisms. There is an important difference between toxic stress and tolerable stress. Toxic stress results from adverse experiences without support or healthy coping mechanisms available and leads to emotional and cognitive trauma to the child. Tolerable stress is caused by challenging situations that are balanced with either emotional support or other healthy coping mechanisms and results in increased resilience among children (Center on the Developing Child at Harvard University). Resilience is an important factor in addressing why some individuals do not experience adverse effects from ACEs. Resilience is a characteristic that children may inherently possess but can also be fostered through positive coping mechanisms and nurturing support systems. It is a protective factor against negative consequences from ACEs.

There is a cycle of ACEs in the population in which people who experience ACEs develop poor health outcomes and then have children. Due to parental health behaviors and outcomes resulting from ACEs, these children are exposed to similar toxic stress. This becomes a vicious cycle. Given the negative impacts and cyclical nature of them, it is imperative that programs exist to foster protective factors, such as resilience, in children.

Many opportunities for intervention have been identified by researchers, with the main factor that can break the cycle known as the development of resilience. Resilience results from nurturing and positive environments where adults are actively involved and invested in the child’s success. Parents are able to foster resilience in their children by providing positive support systems, encouragement, and coping mechanisms to any ACEs that they may experience. Formal programs can work to utilize trauma-informed care to foster resilience outside of the home by creating a positive, nurturing environment with adults that are actively involved in children’s lives and that invest themselves in, and celebrate, children’s successes. This results in a breaking of the cycle and improved health outcomes over the next generation. There are promising programs already existing in Wisconsin that do this work. The Wisconsin Department of Health Services and the Fostering Futures Initiatives have identified awareness of ACEs as a priority, but opportunities exist to take this further (Fostering Futures Initiative). Many programs in place intervene later than is ideal or are connected with the criminal justice system, which in itself can exacerbate or create additional toxic stress. 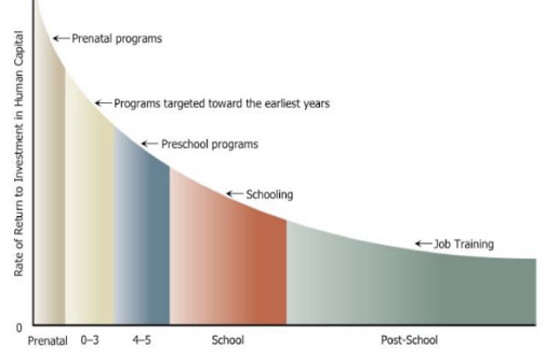 Priority needs to be placed on training adults who interact with children early in life to identify signs of ACEs and traumatic stress as well as creating programs to foster resilience in children at greater risk. This also begins to address health inequities in people of color as well as those living in poverty. People of color and Native Americans are more likely to experience ACEs across the country as well as in Wisconsin. This is true of people living in poverty as well. These populations also experience worse behavioral, mental, and physical health outcomes and are incarcerated at higher rates than the general population. This is one manifestation of systemic racism in the United States and is exacerbated by programs’ connections to the criminal justice system and juvenile detention system. These connections create and exacerbate toxic stress as well as create a connection with the criminal justice system that is then hard to escape. Reducing ACEs, particularly in these populations, will lead to improved long term health outcomes such as lower rates of heart disease, addiction, diabetes, stroke, and maternal/infant mortality.

Innovative legislation must be introduced focusing on concrete action and fully funding existing state programs and initiatives, such as the Fostering Futures Initiative, the Wisconsin Trauma Project, and the Wisconsin Office of Children’s Mental Health Collective. The long term goal of many of these programs is to promote and implement trauma-informed care. These should be expanded and prioritized. Participation in these programs should be incentivized for counties and cities (Fostering Futures Initiative). Priority needs to be placed on identifying and training adults who interact with children early in their lives. This includes health care providers, day care staff, and early childhood education staff. Focus should be placed on training these professions to identify ACEs and traumatic stress in children. In addition, teaching these professions appropriate next steps to take such as enrolling children in ACE prevention programs or having children removed from hostile environments. These professions should be provided points of contact if they do not have the authority to enact these. Programs that foster resilience should be funded and implemented. These are especially important for children at greater risk for experiencing ACEs such as people of color, First Nation people, and those living in poverty.

Finally, discussions surrounding who is involved in interventions versus who should be involved in interventions are important for resilience promotion programs. In reality, those involved are often law enforcement officers. Efforts need to be made to utilize trained mental health professionals or counselors for this work instead and to avoid a criminal record whenever possible. These professions as well as their titles have a lower probability of causing or exacerbating trauma. In addition, law enforcement officers need more training in trauma informed care so that if/when they do need to intervene with children that have experienced ACEs, that they minimize the trauma they are causing.

ACEs are a significant burden to Wisconsin with over half of adults reporting at least one ACE. ACEs cause a plethora of poor health outcomes, including poorer job performance and higher rates of substance abuse, violence, and incarceration. Programs looking at preventing ACEs and promoting resilience in children offer an upstream solution that will create sustainable results. Reducing ACEs in Wisconsin will begin to address racial and income health inequities, reduce long-term public spending, improve productivity, and reduce substance use, violence, and incarceration in Wisconsin, and it is imperative that it is made a legislative priority. 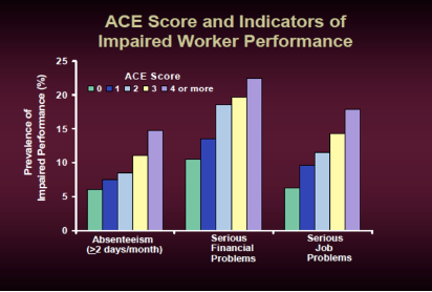