Over the past 40 years the United States jail population has exploded.  From 1970 to 2016, the number of people jailed after an arrest grew from 70 for every 100 to 99 for every 100 (Reducing the Use of Jails).  Today, jails admit almost 20 times more people than prisons annually (Ibid).  Approximately 62% of those in jail have not been convicted (Sawyer et al.).  Rather, they are pre-trial detainees who may have been arrested hours or days earlier and are waiting to be brought before a judge, or they may not be able to afford bail and must await their trial from inside a jail cell.

Unfortunately, the simple act of being jailed exacts a heavy toll on individuals and families, regardless of the presumption of innocence. The US jail population is disproportionately poor in comparison to the overall US population (Rabuy et al.).  On average, people in jail have a median annual income that is 54% less than non-incarcerated peopleof similar ages, making the financial consequences of incarceration especially profound (Ibid).  Over half a million people are in jail pre-trial simply because they can not afford bail (Sawyer et al.).  This has detrimental consequences for employment, childcare, and health outcomes.

Furthermore, jailing more people fails to make communities safer.  In fact,at least 1 in 4 individuals who go to jail will be arrested again within the same year (Sawyer et al.).  The longer someone is held in pre-trial detention, the greater that chance becomes (Recidivism and Reentry).  Many of these individuals struggle with poverty, mental illness, or substance use, conditions that incarceration only serves to aggravate.

In order to address the growing jailed population and financial implications of mass jailing in the United States, policymakers must work to reform pretrial detention.  One key policy recommendation is the elimination of cash bail.

Cash bail was designed as a financial incentive to ensure that a defendant will return to court for their hearings or trial.  Once all necessary court appearances have been made, the money is returned.  If the defendant fails to show up, the money is forfeited to the government.  Pre-trial detainees account for approximately 70% of the US jail population – most of them are there because they cannot afford to pay bail (Onyekwere).

From 1990 to 2009, the use of financial conditions to avoid pretrial detention increased by almost 20% (Liu et al. 5)  This trend holds true for both violent and non-violent offenses (Ibid).  The share of felony defendants who are not eligible for release because they pose a significant risk to the community has remained below 10% since 1990, yet 40% of felony defendants are held in pretrial detention (Ibid).  This highlights that it is the financial issue of affording cash bail, rather than a safety issue, that is contributing to the rise in pre-trial detainees.

Over the same period, the average number of days a defendant will spend in pretrial detention has increased for every offense (Ibid).  Every day spent in pretrial detention represents another day individuals are away from their families and communities, and another day that financial hardships are intensified due to job, income, or childcare loss.  Furthermore, over the past three decades, bail amounts measured in inflation-adjusted dollars have increased anywhere from 33% to 67% depending on the offense (Liu et al. 7).

The median pre arrest income of inmates held on bail is about $16,000 a year, whereas the nationwide median bail amount is approximately $10,000 for felonies (Hayes et al.).  Most incarcerated people are in the lower income bracket, making less than $39,500 per year (Ibid) They typically do not possess the funds or assets to afford even the bail bond premium – customarily a nonrefundable 10% of the entire bond – much less the cost of the full bond. 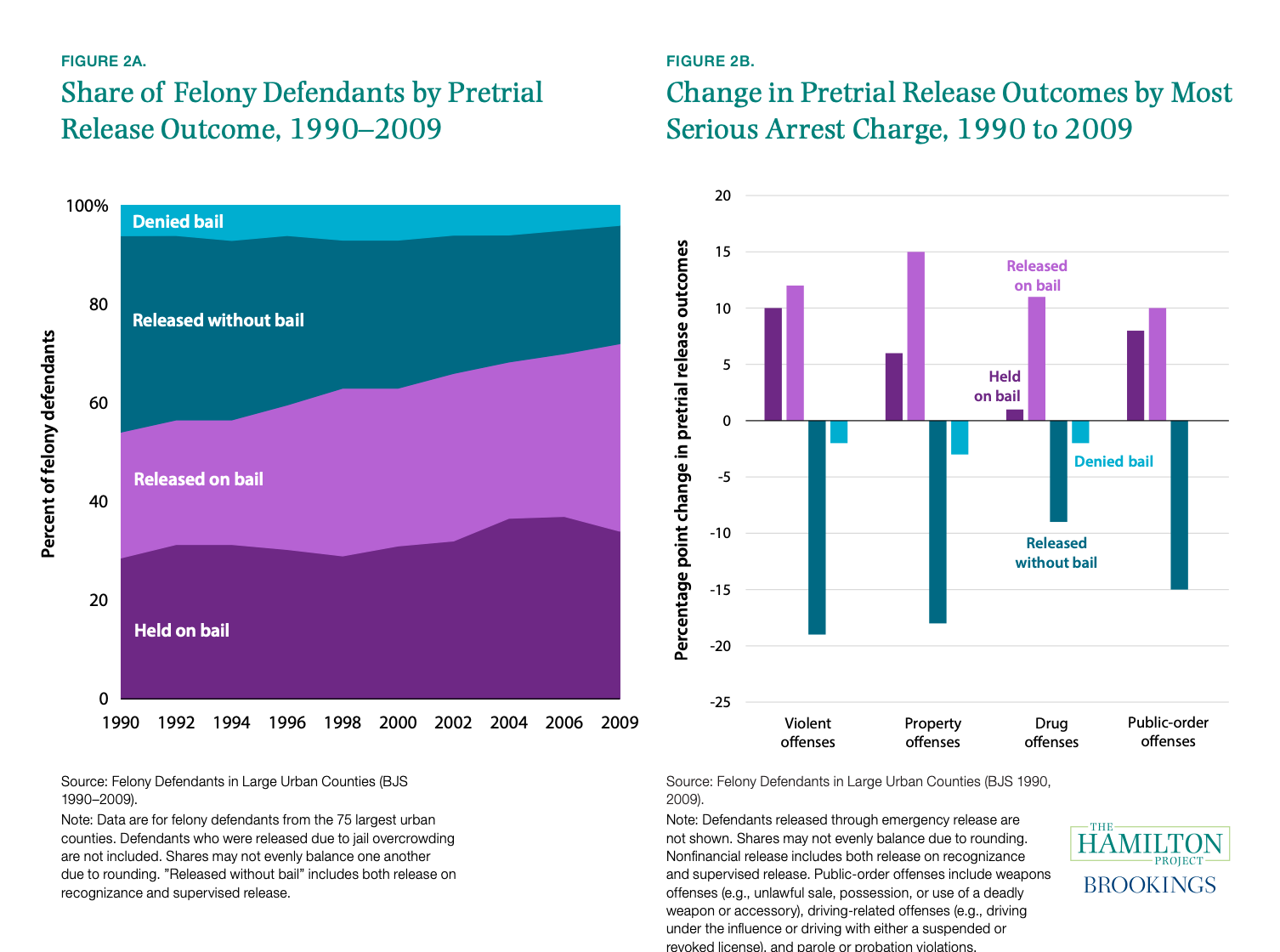 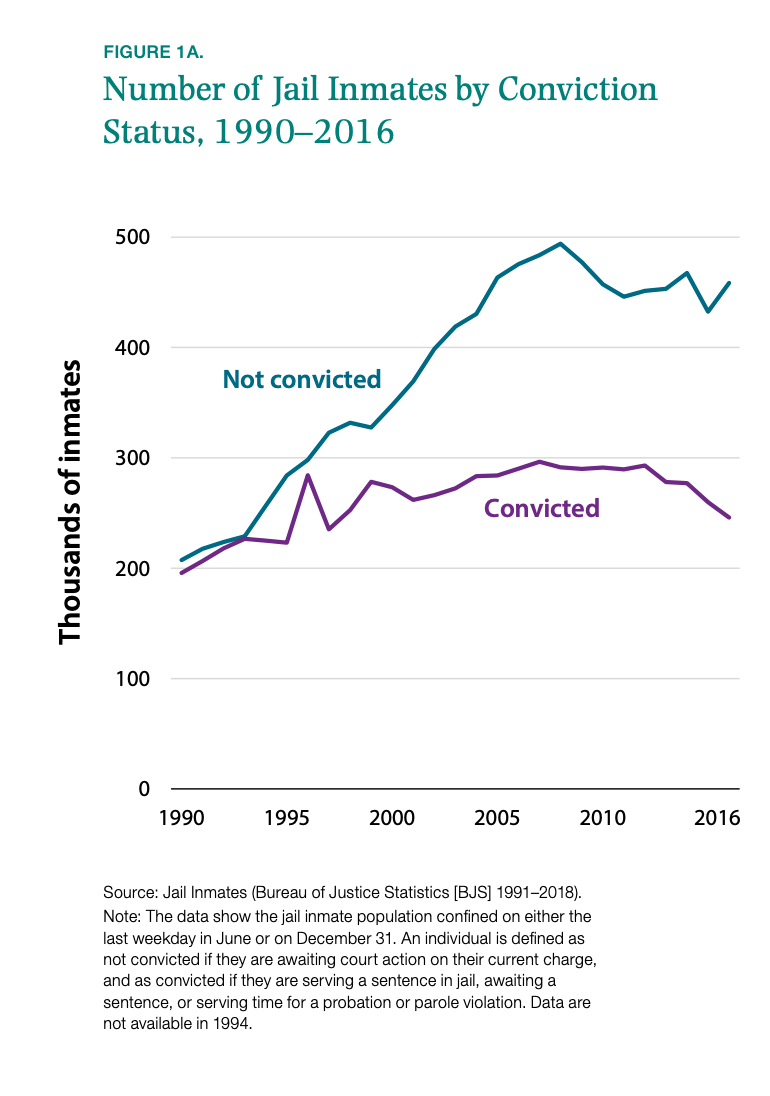 Cash Bail has a disproportionate impact on low income individuals and communities, builds on pre-existing financial hardships, and fails to encourage safer communities.

According to the American Bar Association, “the requirement that virtually every defendant must post [cash] bail… imposes personal hardship on them, their families, and on the public which must bear the cost of their detention and frequently support their dependants on welfare.”  The use of bail and other financial conditions for release in the pretrial process disproportionately impacts low-income communities, as individuals in those communities are least likely to be able to afford cash bail.  Furthermore, those held in pre-trial detention end up with worse trial outcomes on average (Digard 3)  Individuals unable to afford bail may also “lose their jobs, default on vehicles, lose their homes [or spot in a shelter], get behind on child support payments, lose custody of dependent children…and may even lose their health insurance due to being in jail.” (Bail Fail 13)

There is no empirical evidence to support the claim that cash bail makes it more likely that a defendant will return to court, or that it makes communities safer. The bail bond business actually decreases the incentive for a defendant to return to court.  The money paid to a bondsman will not be reimbursed, regardless of court appearance.  Moreover, a defendant may be given a high bail due to the nature of their crime.  As long as they can afford it, they will be released back into the community.  At the same time, a non-violent but low-income offender might remain in jail due to their inability to pay. 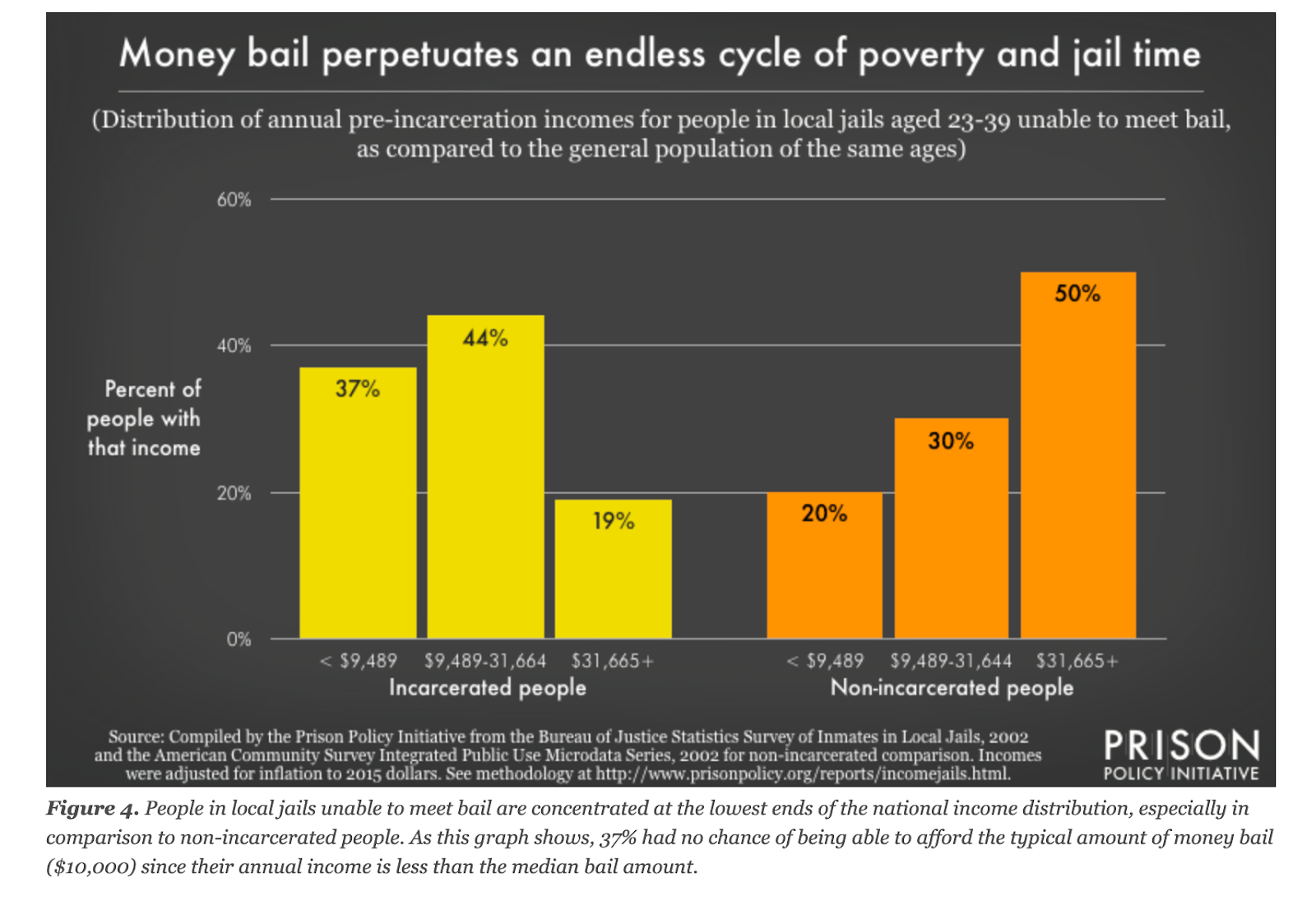 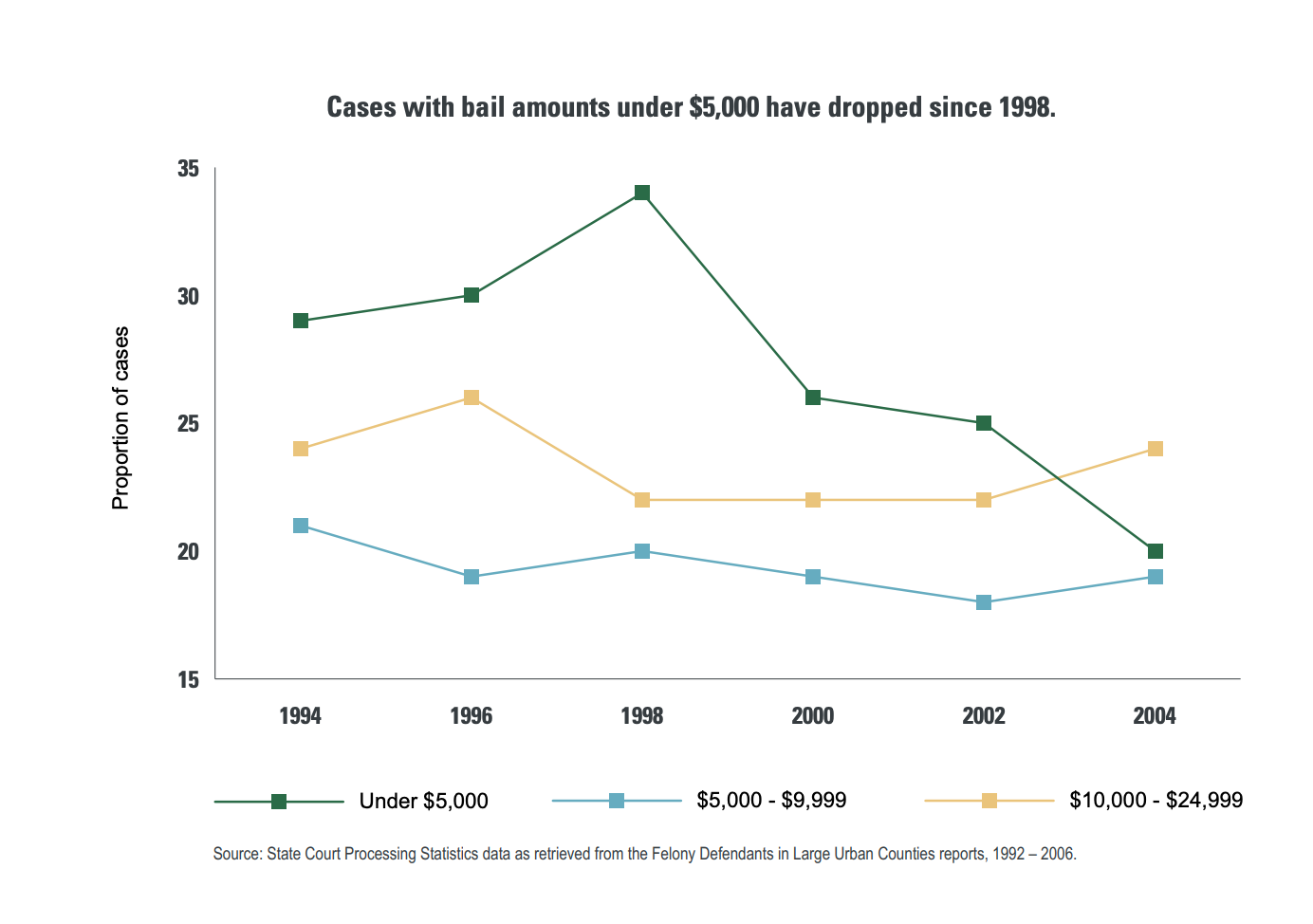 Incarcerating a greater number of people will not reduce crime or prevent violence.  Each increase in incarceration has a marginally smaller impact on crime rates than the last (Stemen 1-2).  In fact, incarceration can actually lead to greater crime – in communities with already high incarcerationrates there can be a breakdown of social and family bonds, deprivation of income, and exacerbation of factors that led to interaction with the justice system (Ibid).  The consequences of spending time in jail for pre-trial detention can hinder an individual’s ability to resume their life after their release, and pre-trial detainees actually become more likely to be rearrested the longer time they spend incarcerated(Recidivism and Reentry).  Defendants who are held in pre trial detention are 1.3 times more likely to recidivate than defendants who are released (Lowenkamp et al. 19)

Cash bail was originally designed to incentivize defendants to return to courts for trials and hearings regarding their case.  However, the vast majority of people who fail to appear at court dates are not purposefully avoiding them (Corey et al.)  Most people who do not show up are among the most vulnerable in the system – the poor, homeless, or mentally ill (After Cash Bail).  Failure to Appear rates in the criminal justice system are around 15-30% – the same as the rate of no-shows at medical appointments, which are often missed for similar reasons (Corey et al.).  Childcare, transportation, and forgetfulness due to long lag times between when a ticket is issued and when a date is set to occur are all major obstacles to appearing in court.

Cash Bail has failed to achieve its desired goal of incentivizing arrested individuals to return to court.  At the same time, it has helped to perpetuate inequities in the justice system by disproportionately impacting low-income and minority communities.  Addressing barriers to appearing in court will more successfully ensure that individuals are present, while at the same time reducing the inequities created by the cash bail system.

Barriers to appearing in court include childcare, transportation, and health concerns. Community bail funds such as The Bail Project have found that by removing the financial incentive of bail and making it easier for people to make it to court dates “creates the equivalent of releasing people on personal recognizance” and does not increase Failure to Appear rates (After Cash Bail; Corey et al.).  On the contrary, when clients are given support to more easily make it to court dates that may be during the work day, or far from their homes, they show up over 90% of the time (After Cash Bail)  The financial conditions of bail do not make it more likely that people will appear – the monetary burden can actually make it more difficult.

This is not to say there are no challenges associated with eliminating cash bail.  Making sure that individuals who do pose a public safety risk remain behind bars is necessary.  Yet, current risk-assessment tools are still grounded in the “racism and economic inequity that has driven mass incarceration in the first place.” (Dilawar)  They have also been criticized for their lack of transparency. (Hunter)  Overhauling these risk-assessment tools is inherent to the process of eliminating cash bail, and introducing new policies that no longer reinforce the inequities of pre-trial detention.

Neal, Melissa. “Bail Fail: Why the U.S. Should End the Practice of Using Money for BaiL” Justice Policy Institute. Sept. 2018

“Reducing the Use of Jails.” Vera Institute of Justice, Mar. 2021, www.vera.org/ending-mass-incarceration/reducing-the-use-of-jails.